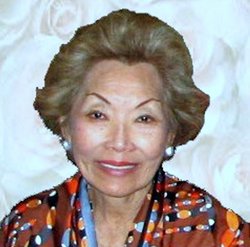 A traditional wooden fisherman’s boat and plaque has been selected and placed as a permanent memorial for local philanthropist Juanita Reed (May 15, 1928-October 6, 2007) by the Lakeside Garden Guild.  This project is one of the several community works sponsored by the Lakeside Garden Guild throughout the years for Ajijic, including the very successful Wipe Out Graffiti project.  The boat is located on the far west end of the Ajijic Malecon, close to where local fishermen keep their boats.

Juanita Reed, lovingly referred to by all as “La Japonesa”,  lived in Ajijic for twenty-seven years.  Reed was originally born in Cuba, where her father was a Japanese diplomat.  She later returned to Japan with her mother and siblings during World War Two.  There she met her future husband, James Herbert Reed, whom she later married after the war.  Mr. Reed worked with a US Commission who was in charge of rebuilding the electrical system in southern Japan.

The Reeds traveled extensively and first came to Ajijic in 1970.  They later returned to live here permanently in 1978.  Reed was an international cooking judge and a phenomenal, inventive cook.  She was one of the first people to give cooking classes in the Lakeside area and was one of the founding members of the Culinary Arts Society of Ajijic.

Reed took an active interest and role in the ecology and the beauty of Lake Chapala and the villages surrounding it.  She founded the “Hagamoslo Junto” (We’ll do it together), a program to instill community responsibility in local children.  The children spent every Saturday picking up trash all along the streets of Ajijic and returned to her home for sandwiches and milk.  She did this for twenty-two years.  She also provided school tuition, uniforms, shoes, medical and dental care.  Whatever they needed she managed to provide.

Reed received many honors at Lakeside.  She was the Salsa Queen of the San Antonio Tlayacapan Salsa Festival in 2000, the Queen of the Lake for another fiesta and awarded many community prizes, including Project of the Year in 1987 and Keeper of the Flame in 1996.  In 2006 the Chapala Municipality honored Juanita (and a Russian lady known as La Rusa by erecting two fishing boats in the Fisherman’s Fountain area on the Chapala Malecon.)  Now she will also be remembered in her own neighborhood of Seis Equinas where many of the workmen who helped build this monument  were once part of her Hagamosto children’s team.  As this project was being completed many people stopped and told stories of Juanita and how special she made them feel.  A few of them now work or volunteer for Ajijic Limpio.  Two of them are responsible for the care and watering of the west portion of the Malecon coincidently where Juanita memorial is placed.  Juanita is still missed by the Expat community as well as the many locals whose children she befriended and inspired.  It is only fitting that there is now a permanent reminder of her on view in the west Ajijic Malecon close to her home in Seis Equinas.

Our deepest thanks and appreciation for all their hard work, talents and dedicating their time are: John Bragg, Pedro Contreas, Damien Diaz, Hector Espana, Efran Gonzales, Carlos Gonzales, Jaime Hernandez and all his workers, and Fredrico Ensico Ramos, Enrique Velasquez.

Peter Simons, Tom Thompson, Jack West, and Jerry Smith,   Without their invaluable help this project could not have been completed.

The Lakeside Garden Guild is proud and honored to provide this Memorial to such an outstanding person.  The Juanita Reed Memorial boat is located at the west end of the Ajijic Malecon in the International Garden.

If you have any questions concerning this Juania Reed Memorial, please contact The Lakeside Garden Guild email address: lakesidegardenguildajijic@hotmail.com